Kristin Miller is an eminent and successful art historian. As a young mother she followed her politics and vocation, storming Parisian barricades and moving to Florence. Her birthday should be a time of celebration but, when her two sons deliver their versions of the past, everyone must confront the cost of Kristin’s commitment to her passions. 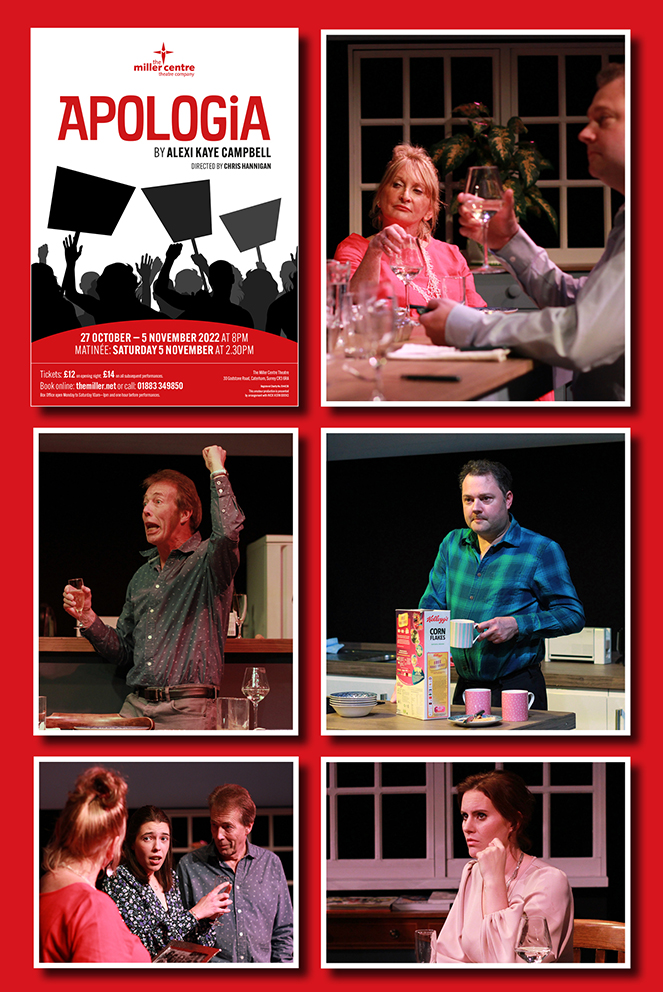 Borrowed from Ancient Greek and with a Latin influence, the word ‘apologia’ can be taken as ‘speech in defence of a position’ – hence, of course, an apology.

In this play, Apologia is the title of one of many books written by Kristin, an art historian, but this one deals with the history of her life – at least that is what she says, but her two sons, whose existence is never even mentioned in the book, take her to emotional task during the double celebration of both the publication of her book and her birthday, which they, their partners and a long-standing friend, attend.

A paper graph of these emotions expressed during the play would have had more ups and downs than the Covid graphs of the past two years, and the language in the play, expressing these emotions is, to say the very least, ripe.

Sharon Czudak creates a feisty Kristin, domineering in many ways as her child-rearing skills are finally challenged by her sons. Her facial expressions and body movements have an uncomfortable way of belying her words and these are particularly effective when unwrapping the gift of a tribal mask which son Peter’s girlfriend Trudi has given her. Full marks here go to Jane Bishop – props – for finding that impressive mask. Kristin continues throughout the play to be argumentative and forceful with Sharon making it easy to believe Kristin’s past exploits as a campaigner on a variety of marches and protest events. There is, though, a hint of her very slight guilt at her total lack of mothering although she does protest against her husband who ‘stole’ her children whilst she had them with her in Italy where she was working. Kristin’s sons, Peter and Simon, are both portrayed by Peter Calver. Peter – his childhood fear making him bombastic towards his mother but tender and protective towards girlfriend Trudi, is a complete contrast to Simon. The characterisation of the brothers is notably achieved. As Simon, his anguished retelling of his mother leaving him overnight, in a foreign railway station, where he was befriended by a stranger whose intent was not good, made intense theatre.

As an American by birth, she says, but not necessarily by choice, Eloise Wynn-Jones certainly cracked the accent as Trudi and, aiming to please Peter’s mother, gushed appropriately. Her reactions to the accident with the red wine in Act II, with its many apologies and efforts to amend, was a highlight. With her Christian beliefs and her amicable nature, Trudi turned out to be the most grounded person around the dinner table.

In receipt of the red wine, spilt over an ultra-expensive designer dress, Simon’s girlfriend Claire is full of self-aggrandisement and the constant denial that the ‘tv soap’ in which she is starring is way above just a soap. Abigail Pedrick brought hauteur combined with a vulnerability to the role, wearing her designer dress with aplomb and managing to make light of the fact that Simon had recently not been home for three days. Her sexual duplicity comes as no surprise, but she too has times when she must placate Kristin.

Often adding a lighter touch to the play is Hugh – Kristin’s long-standing friend - to whom Ian Brown gave just the right levity whilst also often siding with Kristin and enjoying remembrances of their rebellious youth. His seeking of what he considered to be a rogue fingernail in the Chinese meal’s Oyster sauce brought a smile.

Martin Swain’s set design allowed a long table centre stage where meals took place, but the kitchen backdrop, complete with working fridge (but, as scripted, sadly not a fully functioning oven, unable to cook the planned roast chicken). Flying ceiling boards provided a screen for images and the room had a very realistic air for which those involved in the set construction deserve acknowledgement.

This was a very intense play – full of a myriad of emotions. To like, or dislike Kristin; to be appalled by the childhood she gave her children or to think that her  in-depth knowledge of her genre should be used – under any circumstances, as an excuse, will have sent the audience away ready to discuss the pros and cons of the play. Chris Hannigan directed with a real understanding of the characters and his excellent cast did everything they could to set up such a discussion, having provided a most thought-provoking theatrical evening.