by Helene Hanff, adapted for the stage by James Roose-Evans

This wonderful play is a dramatisation of letters between Helene Hanff, a struggling writer in New York and Frank Doel of Marks & Co. an antiquarian book store in London. In a sense, these are also love letters. They are about the love of good literature. The play takes place over a 20-year period from 1949 to 1969, and charts historical events including the coronation of Queen Elizabeth II and the rise of The Beatles through the correspondence between Helene and Frank, the delightfully dusty supplier of so many old volumes to Helene, who shows her gratitude through the years by sending “care packages” to the staff of Marks & Co. 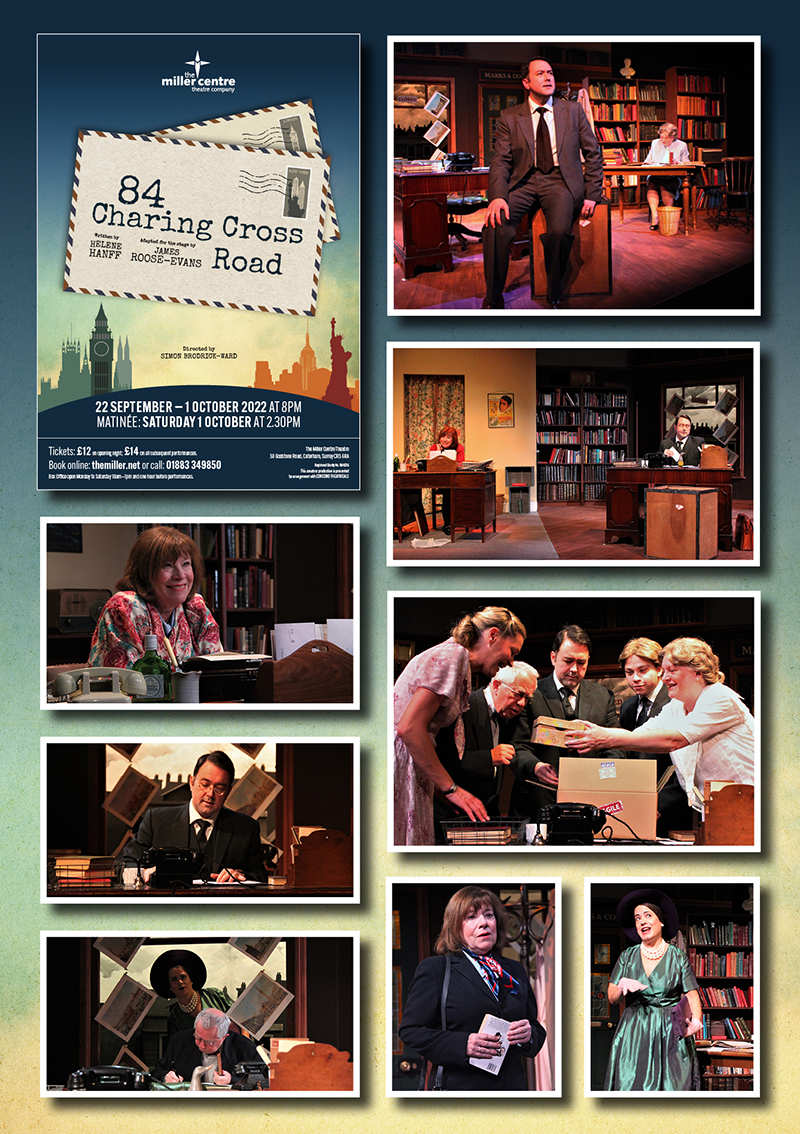 The requirement of a bookshop set together with the heavy demands on the wordy roles of the two central figures, particularly Helene, is probably the main reason this delightful play is rarely seen on the amateur stage. Grasping the nettle, however, Director Simon Brodrick-Ward was fortunate to have successfully cast Janet Edden in the role of Helene and Adam Stevens as Frank. He also took on the additional responsibility of designing his own set.

I was fortunate enough to see a professional production of the play in 1990 with Miriam Karlin in the lead and have been a fan of the play ever since.

The story told is of a burgeoning friendship between the American Helene Hanff, who sought to obtain obscure classic and literature titles, and Frank Doel of Marks & Co in Charing Cross Road, London, whose bookshop was able to supply them. Becoming friends over the long period of 1949 to 1968, when Frank sadly died, the play is based upon their correspondence.

Mastering the accent and the character, as well as the huge number of lines, Janet Edden delivered an excellent portrait of Hanff. Friendly, zany, educated, sometimes demanding and delighting in her ability to send the much-appreciated food parcels to the staff at 84. In contrast to her outgoing American personality, Adam Stevens as Doel, Manager at the bookshop, was initially formal and business like but slowly thawing, counting his American correspondent as a friend. The two characters share life and personal confidences and these are slowly joined by the other staff of the bookshop.

With varying work responsibilities, the movement around the shop of the staff of two women and two men was sympathetically directed, leaving no-one sitting statically for too long, and always seeming to move with a purpose – checking invoices, sorting books, filing books on the shelves or searching for books to fulfil orders. Avril Swift created both the role of shop assistant Megan and later Mrs Todd – both roles effectively done, whilst Michelle Austin as Cecily became more involved with Hanff, sending correspondence herself. Some of Cecily’s dialogue though, was sadly missed as her delivery was rather too quiet and difficult to hear. Few lines were awarded to Roger Dale as Mr Martin who managed to create a considerable amount of ‘business’ for his role – always seeming to be busy about the shop, and it was his voice-over as the pilot, when Helene finally made her promised visit to London, delivering the oft-heard details to be observed for the aeroplane’s landing.

As Alvin, Bram Stein made a rare intrusion into Helene’s apartment, but as Bill Humphries he was part of the bookshop staff, ably joining in the excitement when Helene’s food parcels arrived.

Unable to afford the anticipated trip to London for many reasons – one of which was her expensive dentistry, Helene sent friend Maxine to visit the bookshop for her, with Susan Marinakis as Maxine, sweeping into the shop with verve, and making her mark in this brief appearance.

The set demanded its own accolade – three quarters divided into an amazingly well stocked bookshop, with a much plainer quarter devoted to Helene’s room with just a desk and chair. My only quibble was with the view from the bookshop window which looked very suburban and not at all like the London street where it is set. However, the green shop door, with its beautiful stained glass inset, added much to the bookshop atmosphere. The changing of Helene’s apartment when she was forced to move from her brownstone building was ingeniously achieved.

The all-important lighting design by Jonathan Mash brought a subdued old-fashioned air to the bookshop whilst Helene’s room was almost brash. Wardrobe by Berry Butler and Avril Swift added reality to the period.

Incidental music played a real part in setting the scenes, moving up through the years to underline the passage of time.

This true story was adapted for the stage by James Roose-Evans whose empathy for the friendship, central to the play, was genuinely evident.

Many congratulations are due to Director Simon Brodrick-Ward, his cast and crew for bringing this captivating tale to life.

NB: There is now a brass plaque on the frontage of 84 Charing Cross Road, which closed as a bookshop in 1970. The building has housed many different businesses since. Helene’s apartment in New York has been named Charing Cross House in her honour.