Lost in the fog, a stranger seeks refuge in a nearby house only to find a man shot dead and his wife standing over him with a smoking gun. But the woman’s dazed confession is anything but convincing and the unexpected guest decides to help. Remarkably, the police clues point to a man who died two years previously... but as the ghosts of a past wrong begin to emerge, a tangled web of lies reveals family secrets and chilling motives, where the real murderer turns out to be the greatest mystery of all... 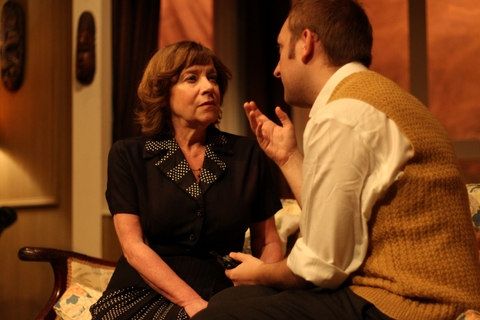 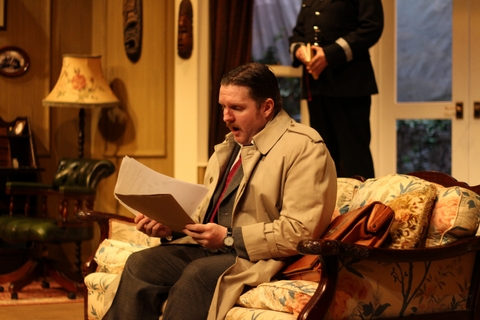 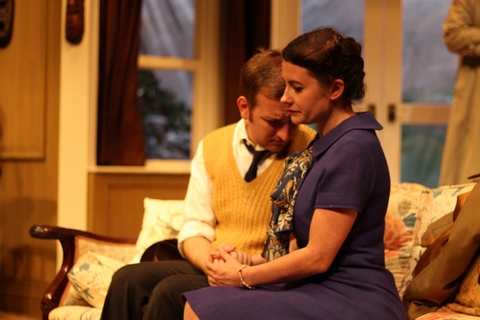 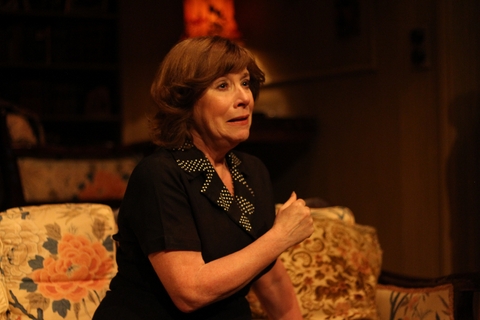 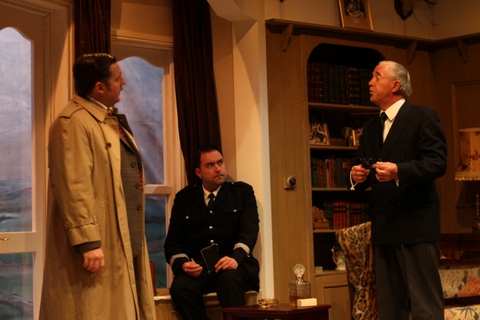 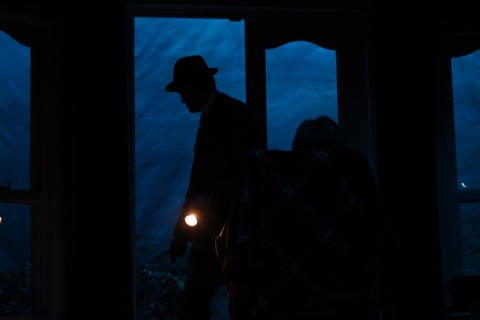 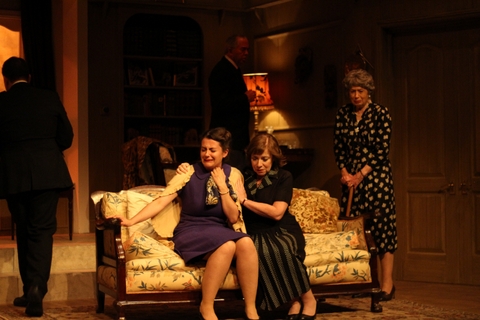 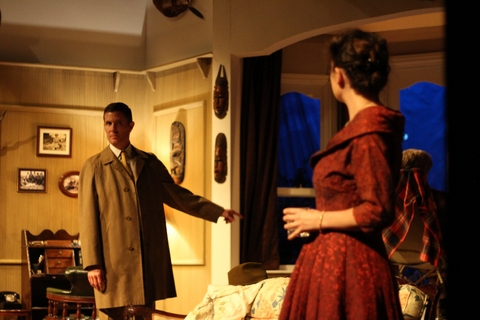 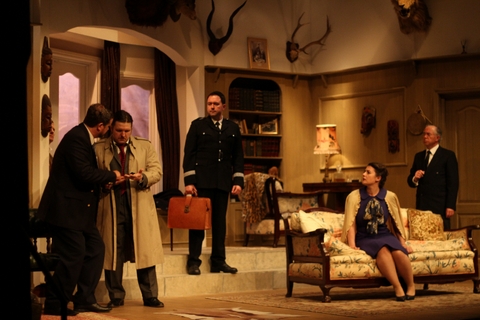 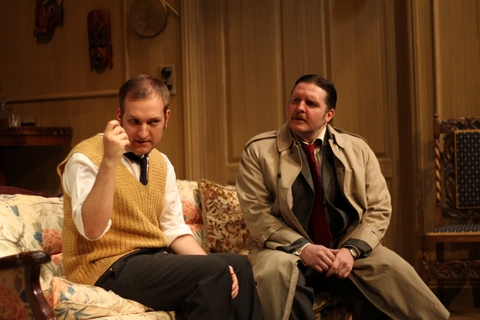 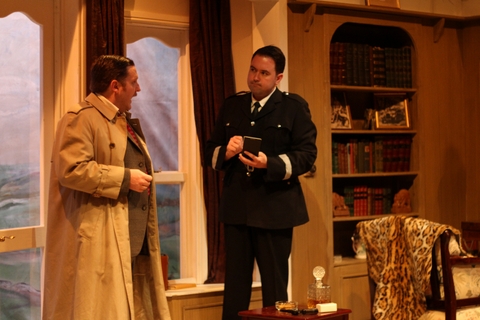 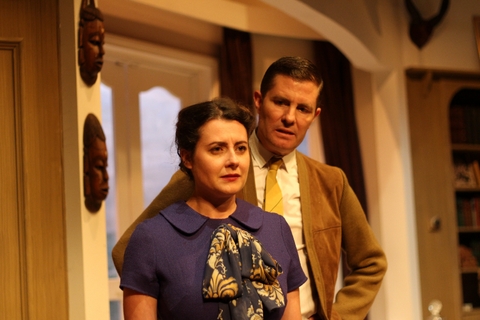 It is dark, there is a thick, eerie mist and, torch in hand, someone enters the rather grand study through the French windows. So begins an Aggie with more red herrings in it than a large tin or sardines.

Although billed as a study, the set designed by Jenny Kingman is beautifully elegant and well furnished, with a few stairs rising up to those French windows, giving an extra dimension to the performing area. Stuart England’s lighting design is subtle, with standard lamps creating pools of light. The visitor with the torch is Michael Starkwedder who apologises to the person he encounters on his entrance. That person is Richard Warwick, and he is dead. Once Michael has found the light switch, Richard’s wife is revealed by the far door, clutching a gun, and much of the ensuring plot concocts a story for the police as to her innocence as, it is assumed, she has killed her husband.

Both Charlie Watts as Starkwedder and Laura Gamble as the wife realistically develop their involvement although, slowly, more of the cast members are revealed with a reason for having committed the deed - most of them plausible.

Nikki Packham is the family matriarch, devastated at losing her son, we believe. A grande dame with a walking stick and a commanding air. Far more emotional, Janet Edden gave Miss Bennett, the trusty secretary, an air of slight panic as well as a strong affection for the deceased’s brother Jan. Slightly deranged and, we learn, under threat from Richard to put him in a home, Thomas Puttock’s Jan struck just the right mentality to show his instability, contrasting it admirably with anger, threats and a tinge of hysteria. Complicating the suspects still further are Henry Angell the live-in nursing assistant for the disabled Richard and Julian Farrar, who is having an affair with Laura.  Roger Dale’s Angell was all obsequiousness on the surface, but there is another side to this servitude which was chillingly sinister. Chris Chambers’ Julian Farrar seemed calm and competent but lost this air quickly, once he realised he was under suspicion. Aggie’s strong arm of the law were the usual inspector and his accompanying sergeant. Serious, of course, Inspector Thomas, Robert Chambers, despaired of investigating the various red herrings whilst Adam Stevens brought a little light-heartedness to the proceedings as Sergeant Cadwallader, stretching his vowels out beautifully to deliver his Welsh accent.
A few anomalies struck me. The head of Richard Warwick, the only part of the dead body seen, was most unrealistic - an odd colour - although I appreciate he was dead, and a gunshot, fired at the sergeant by Jan which we did not hear but only saw the injury it caused.

To deliver a whodunit, keeping the mystery and suspense viable when it has been rehearsed over and over is a considerable achievement and director Jacquelyn Wynter did well to get her cast to keep their realism going as suspicion swung to and fro. A full house said an Aggie was popular and the groans at the denouement showed that very few people had actually been able to guess the truth of whodunnit.

Let’s be honest the storyline of any Agatha Christie play, or novel for that matter, demands that the audience (or reader) suspends a certain amount of disbelief and goes along unquestioningly with the plot – otherwise I am not sure anyone would last the distance.

The ludicrous beginning of The Unexpected Guest, where a helpful stranger walks into a living room on a foggy evening and then engages a new widow in an protracted conversation about what to do in the event of a murder, whilst in the presence of a dead body, is fairly preposterous. As is the fact that every character, apart from the police seem to be implicated in the murder, which explains why nobody seems particularly upset by the death of Richard Warwick, a cruel bully.

The arrival of Michael Starkwedder, the unexpected guest, provides all the other characters opportunities to discuss with him their varying feelings about the dead man and his relationship with them. He is a fresh pair of ears, who has no knowledge of the family history. Played by Charlie Watts he comes across as an urbane, courteous outsider, who seems to take pity on the rather hapless Laura Warwick, and successfully leaves us wondering why he is being so helpful to a complete stranger. Adeptly played by Laura Gamble, we see the unfaithful widow turn chillingly on her protector in a great volte-face moment at the end of act one, reminding him that he is now an accessory to murder.These two solid performers efficiently give us the framework to the piece, before the entrance of the other members of the household. A strong supporting cast: Chris Chambers, Janet Edden, Thomas Puttock and Roger Dale are all believable as friends or members of the household who hold grudges against the dead man. Each one successfully convince us of their potential guilt, while maintaining their innocence. Nikki Packham as Mrs Warwick, the murder victim’s mother, never leaves us in a moment's doubt that she fully recognises her son’s weaknesses whilst effectively providing us with yet another red herring as to her part in the murder. Robert Chambers and Adam Stevens, also turn in good, strong performances as the misled police officers.

Jacquelyn Wynter’s direction is commendable with plenty of attention to minor details of movement and gesture that help to add suggestive hints and clues to the possible murderer and build up to the final denouement effectively, as signified by the gasps from the audience. The costumes are authentic, giving a lovely feeling of period as is the lighting and the atmospheric soundscape. However, the set is a masterpiece with some fantastic set dressing. The stage at the Miller Centre has a great width that allows for the living room to spread effortlessly providing us with French windows, bureaus and sofas, armchairs and desks whilst still allowing for movement. The amazing collection of animal trophy heads sets off the scene and are a constant reminder of the victim’s former life, many congratulations go to Jenny Kingman on a stunning design.

The Miller Centre production of this Christie classic is a solid and engaging piece with some excellent performances; certainly the members of the audience who were not talking for the first ten minutes, eating biscuits from a Tupperware container or looking at their phone (‘I’m just checking it’s off,’ she explained when we glared across) thoroughly enjoyed themselves and were overheard leaving the theatre exclaiming in surprise at ‘whodunnit’ or patting themselves on the back for working it out. Perhaps a pre-show announcement about theatre etiquette would have made it slightly more enjoyable for this particular reviewer.