by J B Priestley

At their stylish country retreat, Freda and Robert Caplan host a dinner party for their colleagues and friends, all executives at a transatlantic publishing company. Young, beautiful and successful they have the world at their feet. Then a cigarette box and an ill-considered remark spark off a relentless series of revelations and other, more dangerous secrets are painfully exposed. As the truth spills out about the suicide of Robert's clever, reckless brother, and the group's perfect lives begin to crumble, the cost of professional and social success becomes frighteningly plain. 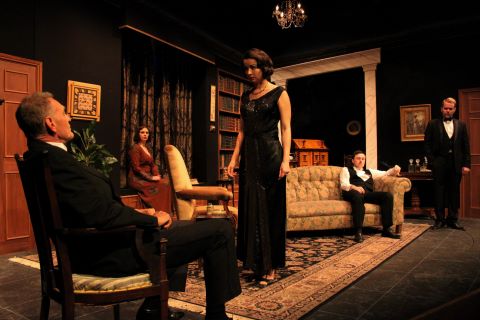 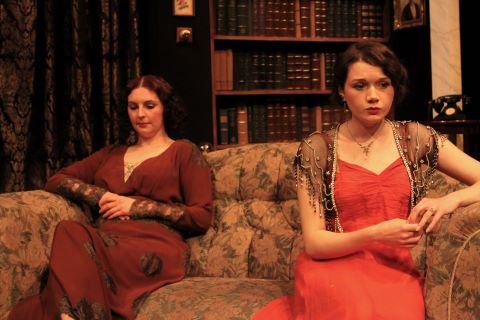 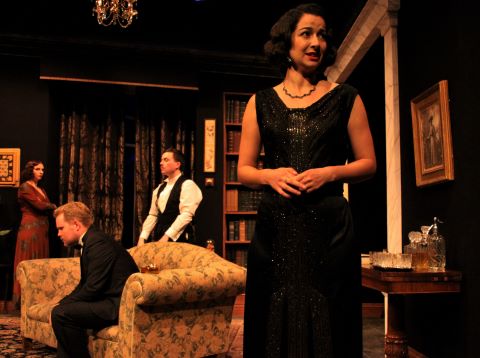 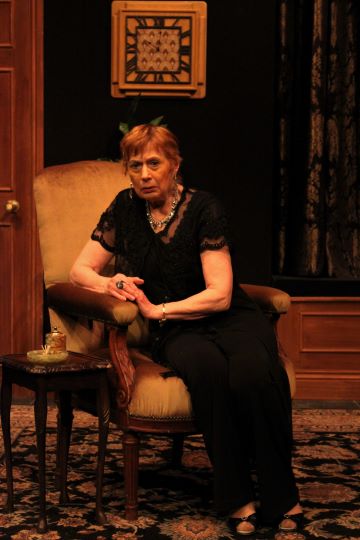 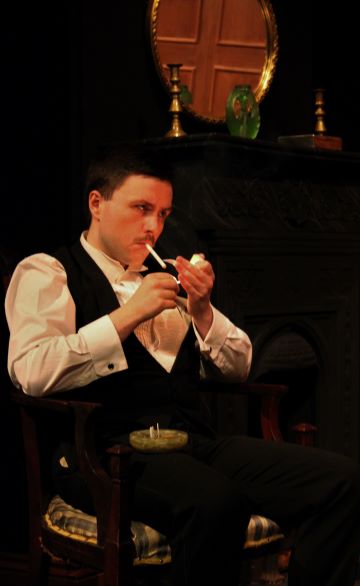 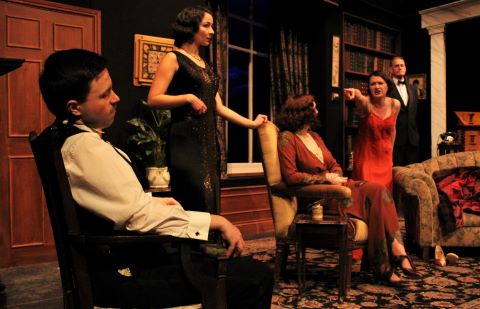 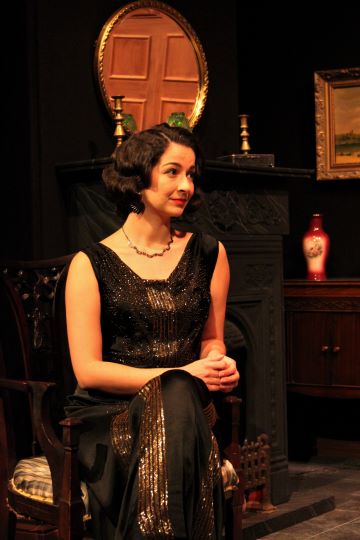 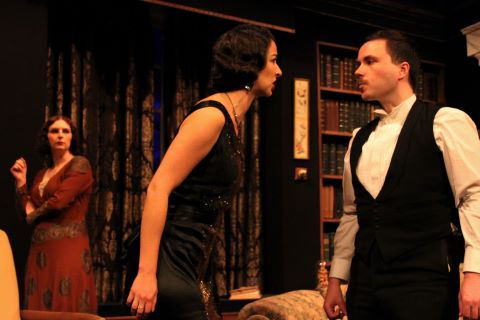 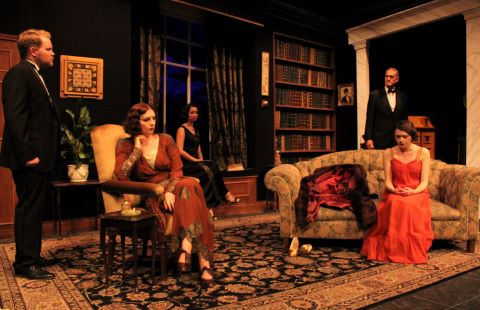 The magnificent set, designed by Keith Orton set the slightly ominous, brooding tone for the unveiling of the family secrets which slowly spilled out as the play progressed. There was dark wallpaper, a prominent library of books and a very elegant arch which provided the main entrance and exit for the cast. Another door may have been for effect only. The large window, necessary for part of the action was, however, hung with curtains which didn’t quite ring true, although they did have to be light enough to be opened and closed at speed which may have dictated their weight.

Dinner was just ending as the ladies retired to the drawing room. Some are related by marriage, Olwyn is a close family friend and all have some connection to the publishing company whose directors are still in the dining room, imbibing mature brandy.

The dinner is to entertain one of the company’s authors, Miss Mockridge, who comments on the closeness of the cosy group with envy.

In a slightly different version of this play, the wireless is announcing the credits to the radio play Let Sleeping Dogs Lie which gives rise to discussion about the need for truth or not to reveal it. Here, the saying enters the conversation, prompting the same discussion. In a happy and relaxed atmosphere the men joind the ladies, with Gordon trying and failing to get some dance music on the radio - a most important moment.

It is Nikki Packham as Miss Mockridge, delivering lines in an American accent, who disturbs the ether by asking about the death of Martin - director and family member whom, we soon learn, committed suicide.

Caused by simply offering a guest a cigarette from a musical cigarette box, the unravelling of movements, hidden loves, infidelities and theft which ensue, once Miss Mockridge has left, are the mainstay of the play. Each character is required to have more than one personality - the genteel, polite dinner party one and a second which reveals hidden truths about their lives and their actions on the night of Martin’s death.

Sara Kruniċ Kirk brought a certain hauteur to Freda Caplan, married to Robert and hosting the evening. Beautifully gowned and authentically crisp of speech for the 1932 era, she metamorphosed from confident hostess to weeping for Martin, Robert’s brother whom she truly loved. Robert, too, in the hands of Jamie Heath moved from genial host to flabbergasted husband, pausing only to reveal his own attraction to Betty, married to Freda’s brother.

In a huff almost from the start, Lucinda Banton’s Betty, married to Gordon, exuded antagonism to the cosy group - her own actions adding to the truths revealed. Her angry outburst in Act III was particularly effective. Equally, the veneer of decorum delivered by Alfie Lanham-Brown as Gordon was soon swept aside with more secrets exposed.

Keeping her calm throughout these rough waters, Gail Bishop created an unruffled Olwen, key, as it turned out, to the truth about Martin’s death, albeit someone with her own secret of unrequited love.
It was left to George Duda’s Stanton - a thief with a chip on his shoulder to be culpable of more than stealing from his fellow directors, which left everyone, with the exception of Miss Mockeridge, with a secret they had kept close to their various chests.

The play has its ‘groan’ points as the intricacies of cross-family affections are admitted. There are rather too many “Yes, I knew that” from different characters but there was a twist, as the opening scene was replayed at the end. The radio came up trumps with the dance music and, instead of an uncomfortable discussion leading to secrets being opened up, dancing ensues and that very dangerous corner is averted.

Perhaps an amount of unnecessary and rather distracting smoking was included but Nikki Packham’s costumes were excellent, just the men’s shoes a little out of time.

Director Peter Shore had imbued the play with an overall intrigue and he and the cast certainly did justice to one of J.B.Priestley’s well-known plays where time and timing is of the essence.