Daisy Pulls It Off

1927 – Daisy Meredith is the first scholarship girl taken from an elementary school to be granted access to the hallowed halls of the prestigious Grangewood School for Young Ladies. Enthusiastic and plucky to the last, Daisy finds herself struggling against unspeakable snobs Sybil Burlington and Monica Smithers, who concoct ghastly schemes to get her expelled. Ably assisted by her new best friend, madcap Trixie Martin, Daisy finds herself caught up in a series of irresistible adventures including the search for missing “Beaumont Treasure”. Can Daisy work out the mysterious clues and save the school from closure? What secrets does the enigmatic Mr Scoblowski hide? This side-splittingly funny spoof of English schoolgirl adventure novels is top notch! 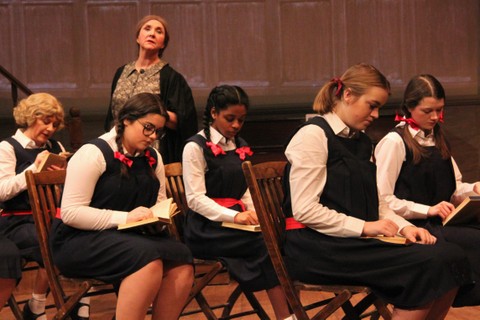 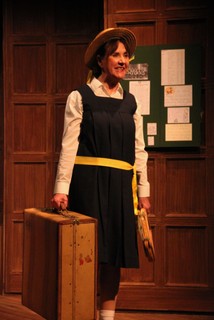 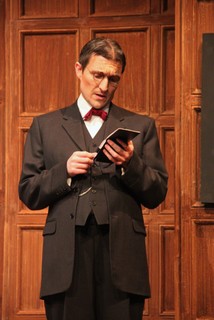 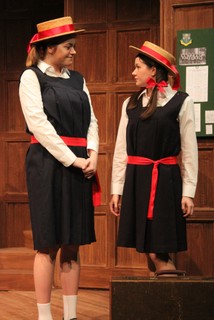 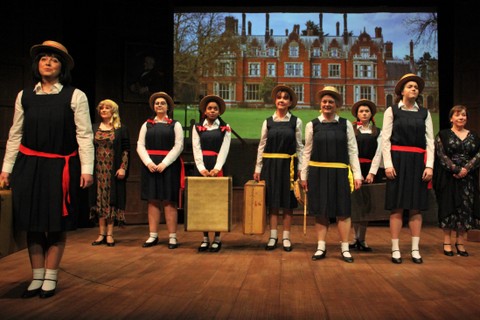 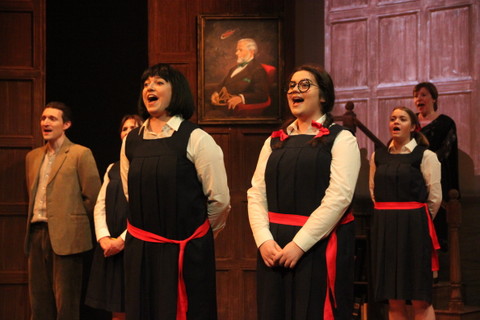 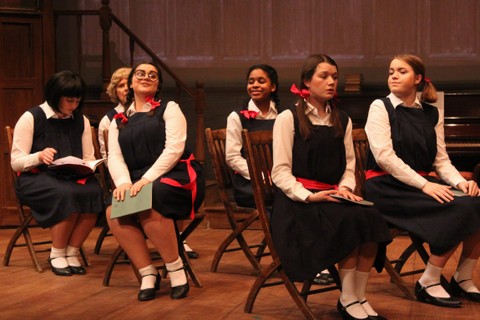 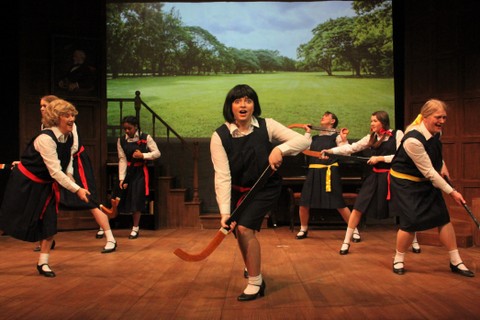 A boarding school pupil myself, I would have loved to have been at Grangewood School, with its large, green sports field, beautifully panelled interior and a uniform far more flattering than mine. I did, however, have a similarly dotty Madamoiselle, like the one played in an admirable fluster here by Nicky Gill, who also performed as Daisy’s sensible Mother and the fidgety pupil Dora Johnson.

With the range of backgrounds in my school, the fuss over an elementary scholar becoming a pupil would not have occurred, but Daisy Meredith had won a scholarship to Grangewood where moneyed parents send their girls. How would she fare?

Penny Parker met the role head on, conjuring up a pupil of fairness, fun, hard work and a sporting prowess. With her expertise in the pivotal role, the characters of the rest of the pupils were also well defined. Fern Simmons excelled as Trixie Martin, Daisy’s good friend, equally good at planning ‘stunts’. Trixie’s jollity and caring helped Daisy survive the sniping and ridicule from the very toffee-nosed Sybil, who did her best to get Daisy expelled. Lucinda Banton’s Sybil was acerbic and spoilt, playing horrid tricks on Daisy with the help of her acolyte, the toadying Monica, with Phoebe Sleeman creating the friend who idolised Sybil and who joined in with her evil plans to bring Daisy down.

With clever use of wigs, some very quick changes and a real change of characters, Mary-Rose Goodliffe ran the gamut between the very irritating but realistically envisaged Winnie Irving - a second-year pupil, the upright Clare Beaumont, Head Girl and Sports Captain and the strict and unbending teacher Miss Granville. All so well portrayed and costumed that I had to check the programme to discover it was the same actor.

Alice Fitzpatrick is vice captain of sport and a great support to her Captain, Clare. With a gung-ho approach and soothing words, Avril Swift made Alice not only a comfort to Clare but as a prefect, dealt out fairness to Daisy and Trixie when she caught them breaking rules.

The tale centred on Daisy’s class, the Upper Fourth, with Lauren Cudjoe as Belinda Mathieson, head of the form, book monitor and one of the live piano players for assembly hymns. It is this piano which provided the imaginary cliff top from which the brave Daisy descends to rescue Sybil and Monica - an ingenious piece of staging.

Aside from Mademoiselle and Miss Granville, staff included the head mistress Miss Gibson. Ever keen to encourage her girls in class and on the sports field, Janet Edden gave her compassion tempered with stern actions when it appeared that Daisy had cheated in her geography test and stolen her best friend Trixie’s poem for the poetry competition. The staff are completed with the enigmatic Mr Scoblowski, given an air of malevolence by Gerard Kelly. A great accent here as well as a curious walk. This, as it turned out, was to distinguish the actor from his role as Mr Thompson who lived in a cottage in the grounds and whose whistling of All Through The Night permeated the play. Just who was he?

The aforementioned panelled set, designed by Tony Dent, transformed itself into classroom, sanatorium, library and gallery, with impressive back-projections of the manorial Grangewood and the sports field which was to be the scene of Daisy’s hockey triumph. The match, choreographed by Perdita Du Pre was a little too stylised for me and relayed its excitement more from the commentary than the action. In contrast, the simply set rescue from the stormy cliff top was well delivered, assisted by sound and lighting.

With an ‘all’s well that ends well’ conclusion, relayed by some very cut glass accents as befitted the 1920s, Daisy did pull it off and found treasure and family to boot, with the experience of director Mike Millsted able to send his audience out with both a chuckle and a smile.