Lettice Duffait is working as a guide in a run-down stately home. But while leading groups of visitors though the house, she departs from the script and treats them to flights of her lively imagination, describing colourful historical events which never really happened. The tourists love it but her superiors are less than amused when they catch her in the act and she is dismissed by her officious supervisor, Lottie Schoen. Lettice retreats to her basement flat and is surprised when, one day, she is visited by Lottie, who reveals her sympathy with Lettice’s approach to the past. Their flowering friendship nearly ends in disaster when they try to re-enact the death of Charles I but they survive and press on with their crusade to enliven history with a touch of romantic fantasy. Maggie Smith made the part of Lettice her own during a long West End run in this delightful comedy. 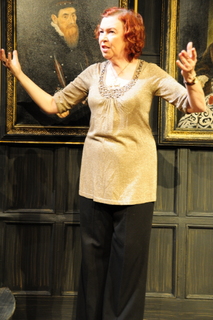 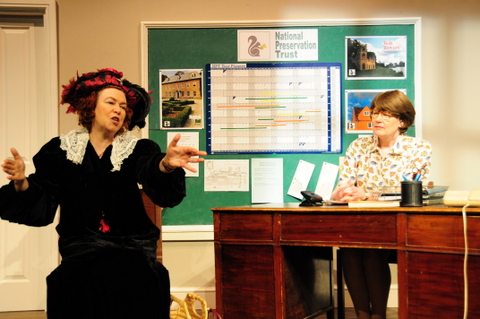 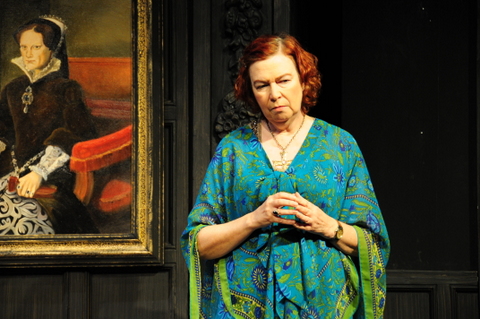 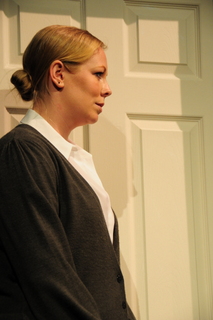 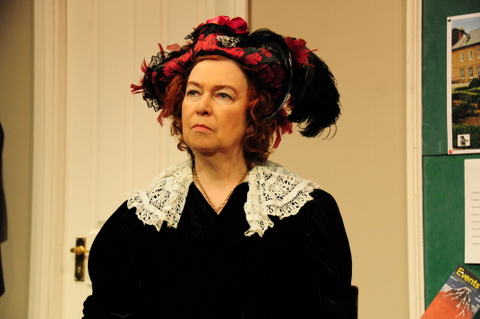 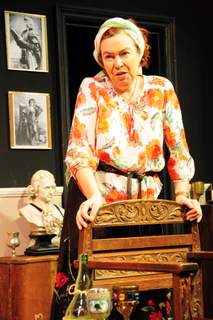 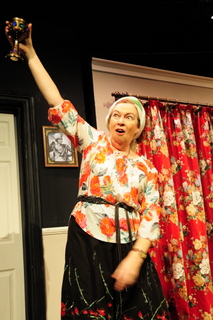 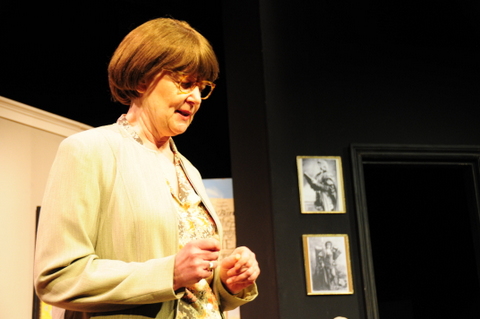 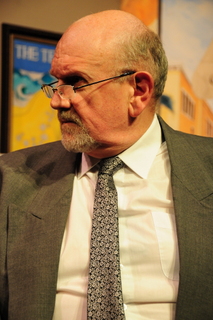 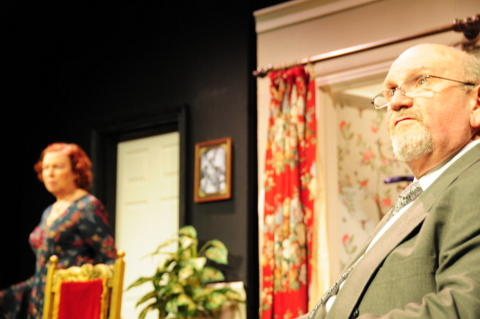 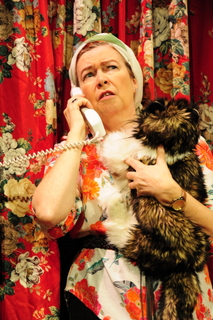 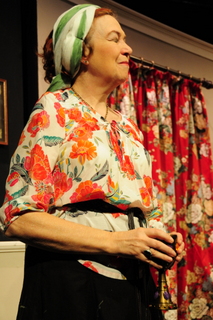 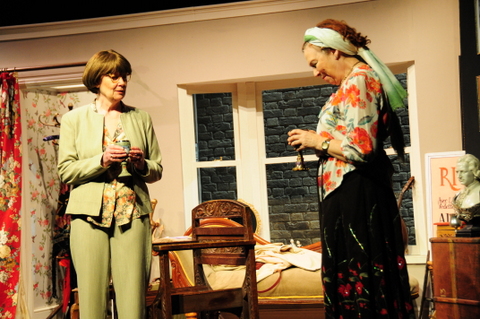 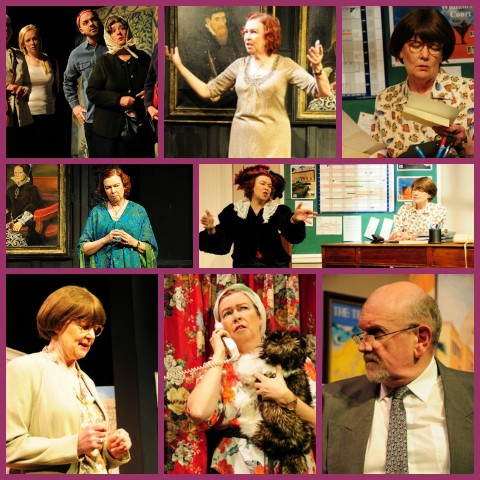 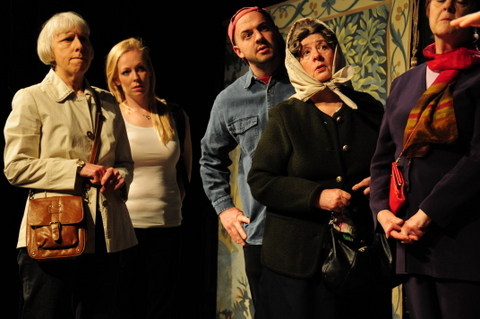 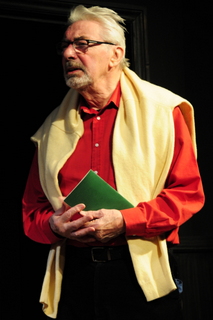 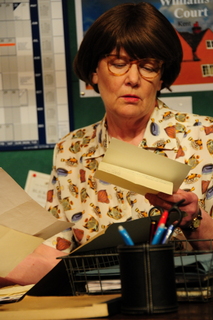 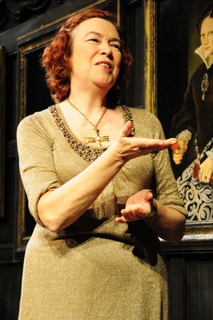 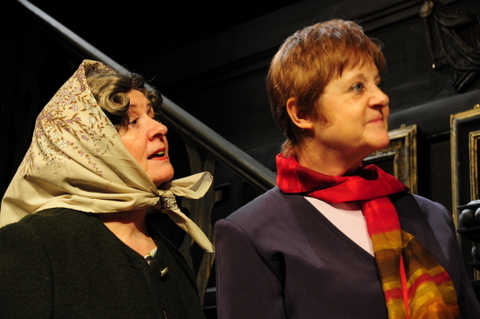 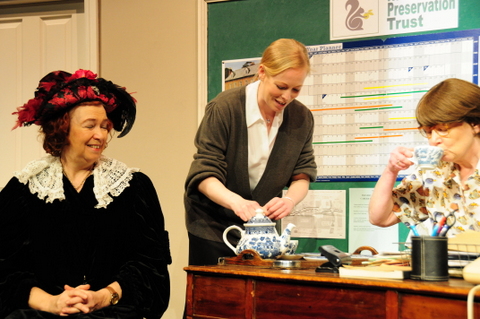 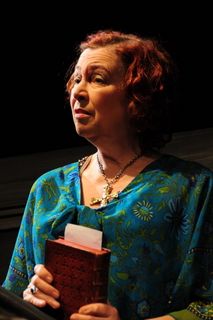 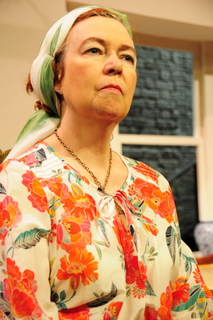 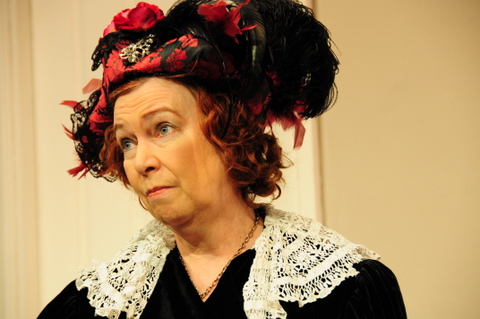 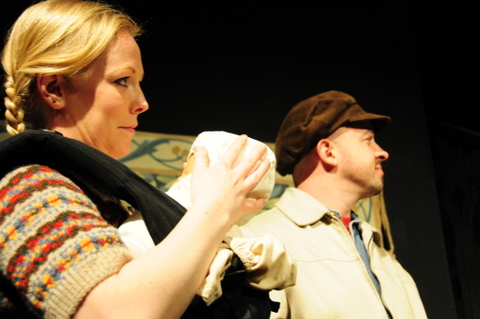 There are two major stars of this excellent production. In no particular order, they are the very ingenious set designed by Keith Orton which, with clever use of the theatre’s revolve, depicts three very different places.

Next comes the bravura performance by Anne Gregory as the Lettice of the title. Not only did she bring this zany character to life but mastered a huge amount of the play’s dialogue. Given a fanciful imagination, to say the least, Lettice affords herself flights of historical fantasy when leading tourists round Fustian House, denounced by her as being as boring as its name implies. The panelled oak hallway, staircase and huge historical pictures are redolent of many such historic houses and beautifully dark and sombre. Due to her ‘enlivenment’ of the actual fact, Lettice is hauled before Miss Schoen of the Preservation Trust in her sparse office where she is summarily dismissed.

The third setting is Lettice’s delightfully cluttered flat where more imaginative stories are delivered when Miss Schoen comes calling with an olive branch and a possible job offer. Much as Act One delivers Lettice’s variations on a theme, Act Two involves the growing friendship between her and Jenny Bardwell as Lotte Schoen, in a characterisation moving from the austere to the slowly melting, to joining Lettice in her fantasy world, with what could have been disastrous results. The initial sparring, moving to friendship, revealed by these two actors created a delightful evening of theatre, encompassing both the comedy and tragedy of the drama masks.

This was enhanced by the attention to detail in the furnishings and props by Jane Bishop and the visible contrast in Berry Butler’s whacky and outlandish costume for Lettice and the straight-laced officialdom of the costumes for Miss Schoen. The brief appearance of the tourists from Act One, who reinvented themselves and their characters so speedily by change of dress and were then redeployed back stage, included Peter Whittle as the Surly Man with the audacity to confront Lettice on her research for the talks she gave. Lucy Auva as Miss Framer, bought timidity and cups of tea to Miss Schoen and Lettice during the office dismissal scene and Keith Orton appeared at the tail end of the play as Lettice’s solicitor Mr Bardoph. Initially uptight and officious he finally metamorphosed into a human being with the ability to provide the drumming sound effects needed to help round off the tale.

Directed with her usual flair by Suzi Whittle, it is to Anne Gregory as Lettice Douffet that hats must be doffed – I ought to avoid using the overworked words tour de force, but I won’t!